The first plane to barnstorm the Duluth Aerial Bridge—that is, to fly below its top span—was a “flying boat” named Lark of Duluth. Behind its stick sat pilot by Tony Jannus, described as “a wiry, cool-nerved young man who gives one the feeling of confidence in his ability.” The plane was purchased by Duluth Boat Club financier Julius Barnes and named to reflect the upcoming summer water carnival hosted by the club, the “Lark o’ the Lake.” Newspapers reported the plane was owned by a mysterious “W. D. Jones,” whose name cannot be found in Duluth directories of the time. It was likely a pseudonym was likely because Barnes was paramount to the success of Duluth’s grain industry and considered far too valuable to be flying about in what was then unproven technology. On June 25, 1913, the Lark took select passengers on exhibition flights. With “Jones” aboard, the Duluth Evening Herald reported, “the boat sailed under the aerial bridge and along the lake shore to the curling club, being the first flying boat to pass under the bridge and the first to fly over Lake Superior.”
Five years later, on March 18, 1918, pilot Wilber Larrabee became the next person to pilot an airplane beneath the aerial bridge. Larrabee, of Minneapolis, was in town to perform a “revue” of acrobat flying, with the dive beneath the bridge his headline maneuver. Unfortunately, a follow-up article on Larrabee did not provide any details of the stunt and only reported that it had been accomplished. Others would follow Larrabee, but few would leave a record of the event—and that has caused legends to brew.
Duluthian William Magie is thought to have flown through the transfer bridge in 1923 or 1924. In 2005 Magie’s wife Lucille told a reporter that Magie was a mail pilot who flew his WACO biplane through the bridge in 1924. When he landed, police were waiting for him—but they let him go when he explained it was just a prank. Another version of the story claimed that Magie performed the stunt “on a $50 bet” and that he “flew a Curtiss Jenny biplane under the Aerial Lift Bridge, did a half-loop and flew back over the bridge.”
Duluthian David Hartley inherited film footage of someone flying through the transfer bridge. Shot from the plane’s cockpit, it shows the bridge coming closer and closer until the plane passes through and flies beyond. Hartley’s father knew a character named “Dusty Rhodes,” a sometimes-bootlegger “notorious for doing things like that.” Rhodes was likely the film’s pilot—if that was his real name.

An undated photo of a Sikorsky H-5 helicopter passing beneath the top span of the Aerial Lift Bridge some time after 1945. (Image: Lake Superior Maritime Collection)

Barnstorming attempts did not end when the transfer bridge qwwas converted into a lift bridge. In fact, one unknown pilot even flew beneath the top span as the bridge was undergoing its transformation from transfer to lift bridge. That flight occurred on October 19, 1929—the very day workers freed and raised the bridge’s top span. Newspapers reported that a seaplane began “circling and dipping close to the top of the bridge, and even flying under it while the span was slowly moving upward.” But no one took a picture, and no one took credit.

A helicopter passed through once, as shown in the photograph below, discovered in the archives of the Lake Superior Maritime Collection at the University of Wisconsin Superior’s Jim Dan Hill Library. Unfortunately, the photo includes no notations, so the date and pilot are lost to history. The helicopter appears to be a Sikorsky H-5, first made in 1945, so the fly-through would have to have occurred after that date.

Many people think World War II “Ace of Aces” Richard A. Bong barnstormed the bridge. Bong, a native of Poplar, Wisconsin, shot down forty Japanese planes while flying his beloved P-38, nicknamed “Marge” for his wife. In 2006, John Hoff told a reporter he witnessed Bong take his P-38 through the bridge in 1944. Hoff was then eleven years old, visiting his father’s office in the Alworth Building. He swears he saw a P-38 fly in low from the east and emerge west of the bridge. Unfortunately, no one else saw it. Roy Mahlberg said he remembers that the next day the Duluth News Tribune featured a photo of Bong’s plane flying under the bridge, but research has yet to find it in the newspaper’s archives. Bong certainly was capable: he once flew a loop-the-loop under and over the Golden Gate Bridge.

Maybe Hoff did see a P-38 pass under the bridge. If so it was likely piloted by Duluthian Jack Daniel Brown, an Army Air Corps pilot. Brown’s descendants recalled that in either 1943 or 1944, he and another pilot were ordered to transport two P-38s from Texas to Novia Scotia. Along the way, Brown flew over Duluth, where he buzzed the Park Point home of his brother, lift bridge operator (and later chief bridge operator) Bob Brown, close enough so his family could see his face. Jack then approached the bridge from the bay side, flew between the aerial bridge’s top and lift spans, and headed to the east coast of Canada. Of course, no one took a picture…. 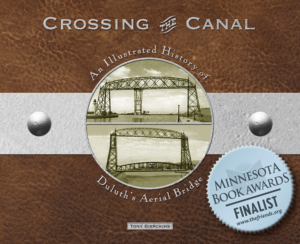