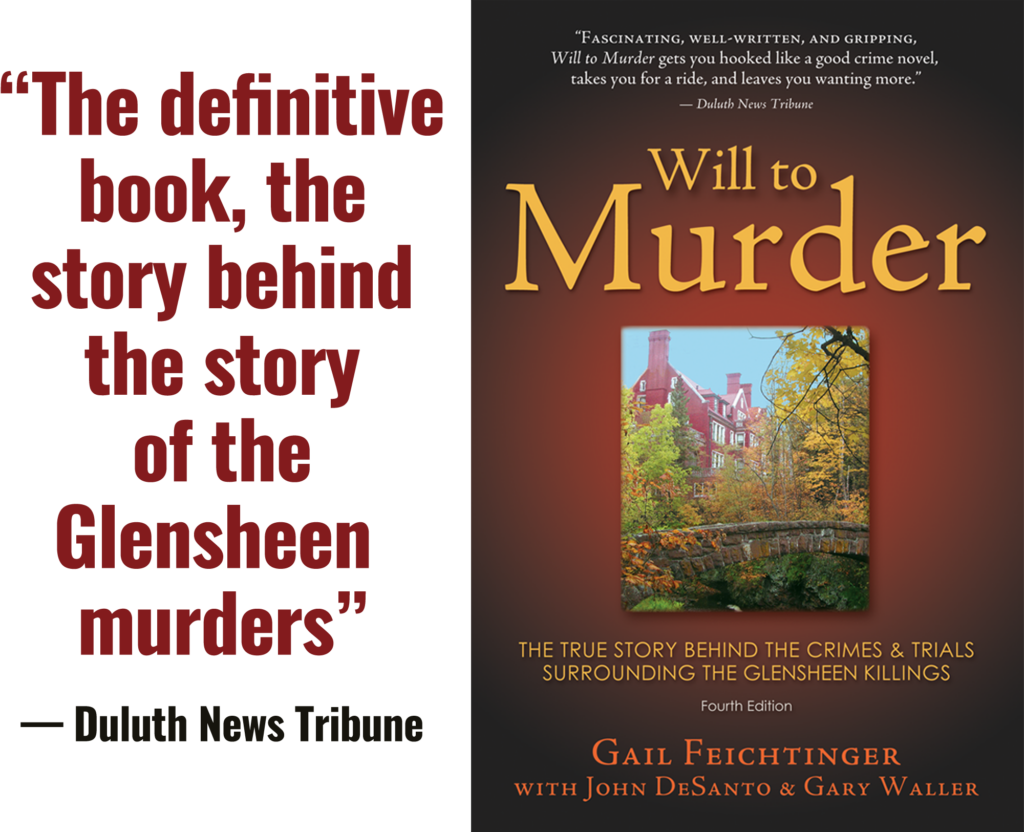 Also available as an e-Book!

Will to Murder is available as an eBook for just $11.

On June 27, 1977, an intruder entered Glensheen, the stately manor built along the Lake Superior shore by Chester Congdon, patriarch of one of the most generous and respected families in Duluth, Minnesota. Before leaving with a basketful of stolen jewelry, the intruder used a satin pillow to smother Chester’s last surviving child, Elisabeth Congdon, after killing the heiress’s valiant nurse with a candlestick—crimes set  in motion by a handwritten will penned just days before the murders.

Inside Will to Murder, the story of the crimes and trials surrounding Marjorie Congdon Caldwell Hagen, Elisabeth Congdon’s notorious adopted daughter, is brought to light by former Duluth Detective Gary Waller and St. Louis County Prosecutor John DeSanto, the men who first investigated and prosecuted Marjorie and her husband, Roger Caldwell.

Together with former Duluth News Tribune crime reporter Gail Feichtinger, Waller and DeSanto bring readers behind the scenes of Minnesota’s most infamous double murder. They frankly discuss their successes and failures in order to explain how a man who claimed innocence was convicted of two counts of murder and later confessed to the crimes—only to be set free. Feichtinger then reaches beyond the Glensheen killings to follow Marjorie through her convictions for arson and other crimes, presenting evidence that suggests she may have gotten away with murder—five times.

“Fascinating, well-written, and gripping, Will to Murder gets you hooked like a good crime novel, takes you for a ride and leaves you wanting more. Finally, the definitive book, the story behind the story of the Congdon-Pietila murders.”

“[Will to Murder] contains a wealth of known and new information, but keeps one turning the pages in much the same way as a well-plotted mystery.”

“The definitive work on the [Congdon-Pietila murders]...the authors provide an inside story that has never been heard before... riveting... compelling... Will to Murder covers all the bases.”

“The most informed account yet of the chilling details, bizarre twists, and lingering mysteries surrounding the murders Minnesota can’t forget.”

“[Will to Murder is the] ideal read for those non-native Minnesotans who may not know what went on, or for those who simply cannot get enough of the family Congdon and the travails that ultimately left two people dead.… The book sizzles.”